Occasionally, my Windows XP SP2 laptop has had the Blue Screen of Death appear unexpectedly. It doesn’t occur when any particular application is running, and nothing ever is written to the event logs. Of course I’m never at the computer when this happens, so I haven’t been able to see what messages and parameters are shown on the BSOD. I have debugging information written to a small memory dump (aka mini dump), but without special tools, these dump files are indecipherable.

I decided to try using the Windows Debugging Tools to figure out the cause of these errors. I needed to make sure I downloaded the proper version for both my processor (32 or 64-bit) and operating system. I also needed a copy of the i386 directory from my Windows XP SP2 install CD, which I copied to my hard drive as c:\i386\. I could have downloaded the appropriate symbol files for my OS and processor, but I chose to use the symbols on Microsoft’s web site instead.

Once I had the tools installed, I launched a command prompt and switched to the debugging tool installation directory, which for me was c:\Program Files\Debugging Tools for Windows\. Next, I lauched the graphical debugger my entering the following command (as all one line):

What this command did was:

This lauched the debugger gui, which loaded the following screen 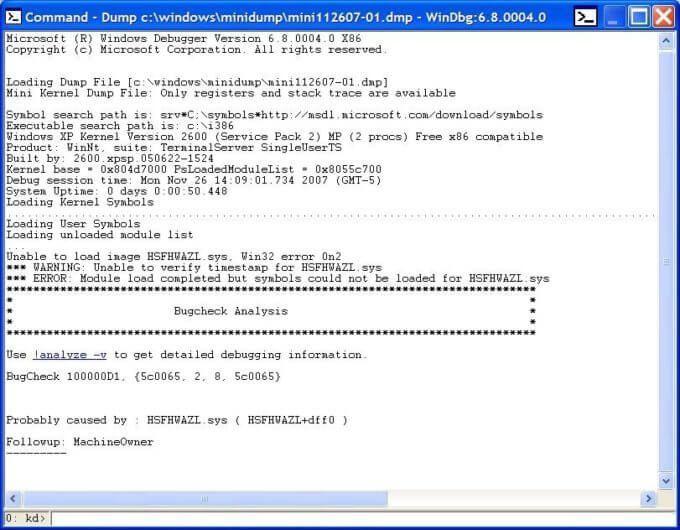 As you can see, the analysis states that the problem was likely caused by hsfhwazl.sys. I had no idea what that file was, but it’s .sys extension led to believe it was a device driver. A quick search found the file was a part of the Conexant Softk56 modem driver. I don’t think I’ve ever used the modem in this laptop, and the modem surely wasn’t in use when the most recent blue screens occurred.

I’ve now updated to the most recent version of the modem driver, and I hope I won’t be seeing the BSOD anytime in the near future. I figure it took me all of about twenty minutes to download the debugger, analyze the mini dump files, and resolve the problem.

For more information on how to read the small memory dump files that Windows creates for debugging, see KB 315263.