Resources for Troubleshooting Windows Event 2019: The server was unable to allocate from the system nonpaged pool because the pool was empty

Written by: Aseem Kishore
Posted on: November 20th, 2007 in: Troubleshooting

One of my client’s servers needs to be rebooted three times a day because of server hangs. A look in Event Viewer finds the following error corresponding to the time the server stops responding: 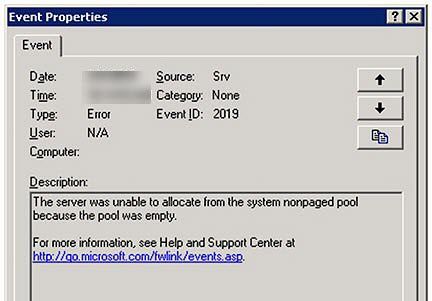 They reboot the server, and the problem goes away for a while.

I performed some searches and found many potential known causes of this error, from Norton Antivirus 7.0-8.0 to Symantec Antivirus 10.x to ARCServe to SQL Server, but none of the suggested fixes resolved the issue. I used the following articles during the troubleshooting process:

KB 133384 for using Performance Monitor but couldn’t isolate the source of the memory leak.

I used the following tools to try and diagnose the source of the memory leak:

Poolmon.exe per KB 177415. Warning – using poolmon is not for the faint of heart

Memsnap.exe – This command-line tool takes a snapshot of the memory resources being consumed by all running processes and writes this information to a log file.

Debugging Tools for Windows was over my head, probably not useful except for programmer types.

This article has a nice description of using Process Explorer to determine your system’s maximum values for Paged and NonPaged Pools, while this one talks about troubleshooting memory leaks. This one discusses capturing application crash dumps, which allows for debugging services such as Print Spooler.

After using all these tools, I finally found the source of my problem with plain old Windows Task Manager. This article suggested viewing the Handle Count, with processes over 5,000 being suspect. Once I viewed the Handles column it was blatantly obvious JMBtnMgr.exe was the memory hog. I watched the handle count grow from 2,100 to over 6,000, when the server became unresponsive.

After restarting the server I found a shortcut to JMBtnMgr.exe in the Administrator startup menu. I took the shortcut out of the startup menu, restarted the server one more time, and haven’t found it hung in four days.

Counting the Number of Files in a Directory, Command Line Style