Howto: Generate Many Files of a Particular Size in Windows

I was recently performing some performance testing that required me to copy many files of a particular size from one Windows workstation to a Windows file server. I had a heck of a time figuring out how to batch generate the test files.

Finally I came across the fsutil tool, which is included in all versions of Windows from Windows XP to Windows 10 and also in Windows Server editions. When using the command, make sure you are already in the directory where you want the files to be created.

The syntax for using fsutil is:

I used a simple loop to create files of a particular size using fsutil. Running from a command prompt: 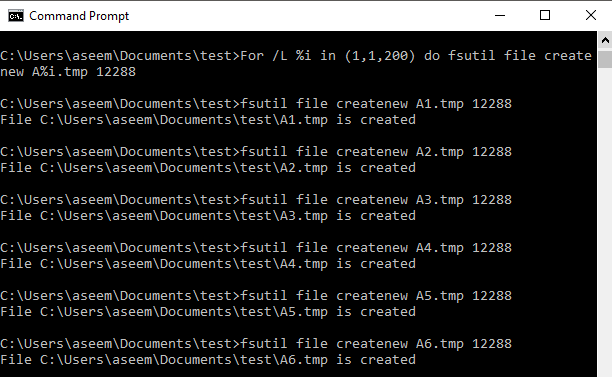 To run this loop in a .cmd file instead of from the command line replace, single % with double percent signs.

I was able to create hundreds of thousands of files of a very specific size in a short amount of time using this procedure. It’s a pretty powerful utility and not that many people even know about it.

How to Upgrade Microsoft SQL Server the Right Way

How to Perform an Active Directory Install from Media (IFM)

Fix: “The IP address you have entered for this network adapter is already assigned to another adapter…”